One of the most memorable — and best — dishes from Thanksgiving dinner at Jiko last year was the parsnip crème brûlée. At that point I was pretty crème brûléed out — it’s basically on every Disney sit-down restaurant menu as a gluten-free dessert option — but my interest was piqued when I overheard another server describe the dish as “better than pumpkin pie.” She was right.

While on the surface such an odd pairing — a not-so-popular vegetable with one of the most indulgent desserts — it was brilliant. The slightly spicy flavor of the parsnip hits all the fall notes, and its natural sweetness bridges the dessert gap. And the pile parsnips on top? Delicately crisp, a perfect mirror of the caramelized sugar layer on the custard. It so worked. And has been on my mind ever since. In order to re-create the magic at home, roasting the parsnips is the way to go — it mellows their sometimes sharp flavor while enhancing their buttery sweetness. The custard comes together quickly in a food processor and then rests overnight to allow the flavors to meld before baking. The candied parsnips are a bit tricky — only in that they need to be made within about an hour of serving the crème brûlée, otherwise they become sticky and no longer crisp. (As for timing, if you’re making this recipe for a holiday meal, when someone else starts cleaning the dinner dishes you can get to work on making the garnish.) They are by no means necessary, but do add that touch of somewhat over-the-top je ne sai quois.

I hope you enjoy this unexpected, festive dessert as much as I do! I do believe this recipe would take very well to doubling, just use a large pan (9″x13″) instead of the 8″x8″.

Preheat oven to 450°F. Line a small baking sheet with parchment; set aside. Cut parsnips into about 1/2″x3″ pieces; toss with olive oil. Place on baking sheet and roast — turning half way through — until slightly caramelized on the outside and softened (about 25 minutes). Cool to room temp.

DO AHEAD: Parsnips may be roasted and cooled several days ahead of time. Refrigerate until ready to make custard.

Transfer cooled, roasted parsnips (about 1/2 cup) to the bowl of a food processor. Run machine until they’re as broken up as possible, about 1 minute. Scrape down bowl, add evaporated cane juice and process until the mixture becomes more like a finely textured paste, about 1 minute (scrape down bowl as needed). Scrape down bowl, add egg yolks and process just until mixture is slightly lighter in color. Scrape down bowl, add heavy cream, vanilla bean seeds and pumpkin pie spice; pulse several times, just until combined. Strain mixture through a fine mesh sieve into a small bowl — it’s thick so you’ll need to press it through with a spatula or spoon, make sure to scrape underside of sieve to get every last drop (you should have less than 1 tablespoon of waste). Cover and refrigerate for 8 hours or overnight.

Preheat oven to 300°F. Remove prepared custard from fridge, stir. Divide mixture amongst three small ramekins (each about 6-ounce capacity). Set ramekins in an 8″ square baking dish (arrange in an L shape to make it easier to pour in water). Place baking dish in preheated oven, carefully pour hot tap water into dish until it’s about half way up the sides of each ramekin. Rearrange ramekins into a triangle shape and bake just until a slight wiggle remains in the center, about 40 minutes. Allow custards to cool in the water bath for about 15 minutes or until cool enough to handle. Transfer to fridge to chill completely (about 2 hours).

DO AHEAD: Custard may be baked and chilled a day or two in advance.

About 30 minutes – 1 hour before you’re ready to put the finishing touches on the crème brûlée, make candied parsnips. Preheat oven to 300°F. Line a baking sheet — small if using one parsnip, large if two — with parchment; set aside.

Remove and discard peel from parsnip(s). Using a peeler, cut as many thin, long strips (about 1/2″ wide) of parsnip as you can manage; set aside. In a small saucepan (2-quart) combine water and evaporated cane juice. Set over high heat and bring to a boil. Remove pan from heat and stir in parsnips. Carefully remove parsnip slices one by one, shaking off excess simple syrup, and arrange in a single layer on prepared baking sheet.

Place baking sheet in oven and bake for 10 minutes. Remove from oven, flip slices over and cook just until slightly browned, about 10 minutes more (you want them to crisp up once they’re removed from the pan and cool for about a minute or two, I recommend removing one to test for doneness). Peel off parsnip strips and set on a clean sheet of parchment to cool (when removing from the baking sheet, feel free to twirl/make more interesting shapes before transferring to new parchment).

Remove cooled custards from fridge, top each with an even layer of brown sugar (1 teaspoon each). Set under a preheated, highest heat broiler until nicely browned (about 1 – 2 minutes, keep a close eye on them!) or caramelize using a blowtorch. Allow to cool for about 1 minute, top with candied parsnips (if using) and serve. 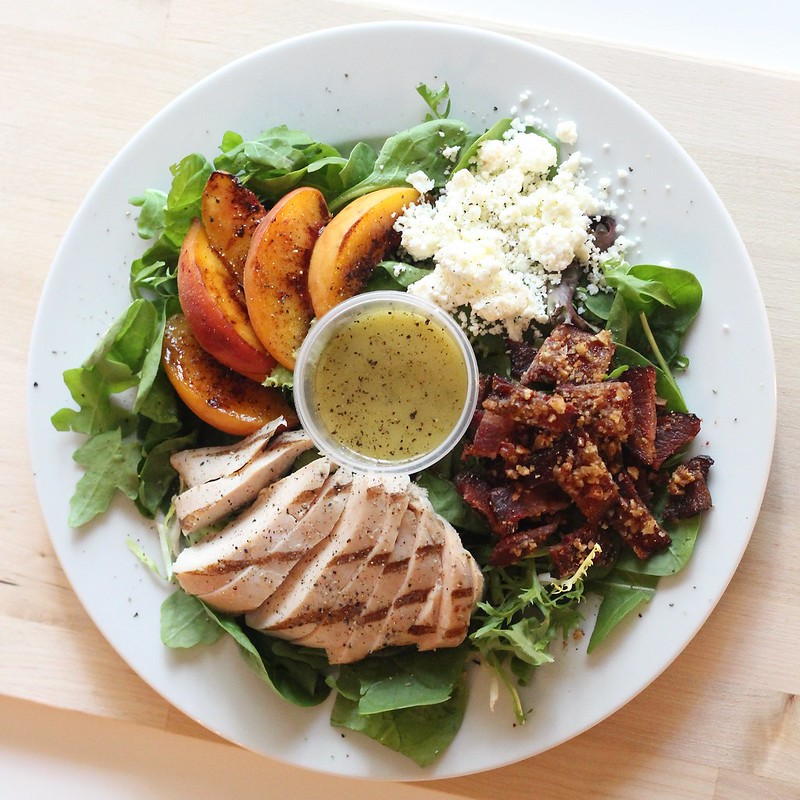 The Strand’s Grilled Peach Salad (With Praline Bacon!), At Home